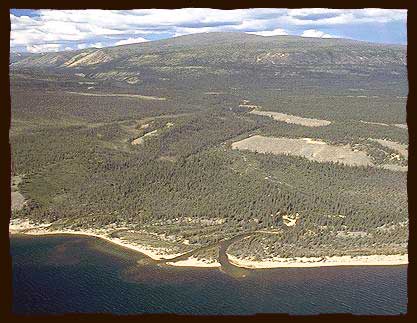 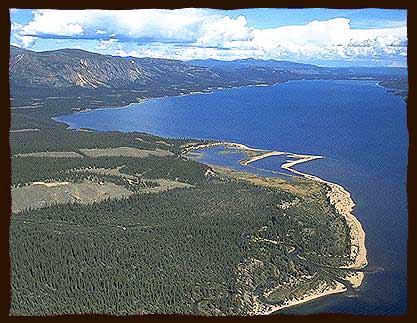 The creek is called Tthe Yì Chù ‘running through rocks’ because it goes through a steep sided, rocky mountain pass. At the head of the creek there is a string of small, very deep and blue lakes. One drains to the east into Tthe Yì Chù (Isaac Creek), the others to the west into what is also called Tthe Yì Chù in Southern Tutchone, but Gladstone Creek in English.
This creek is most important as a trail from Aishihik to Gladstone Creek and then to Kluane Lake. While travelling through, Äshèyi people would hunt and dry sheep, caribou and ground hog.

On Kluane Lake the young boys gathered wood and lit a big fire. The traders at Burwash Landing would see the fire and boat across the lake to pick up the people. They bought the basic goods at the post: flour, sugar, tea and baking powder. The women and children remained on the shore near the mouth of Tthe Yì Chù, waiting and playing games.

Isaac Creek is named after Chief Isaac, Äzhäntà, who died around 1920. He had twelve children. Äzhäntà guided prospectors and surveyors, and staked some claims.