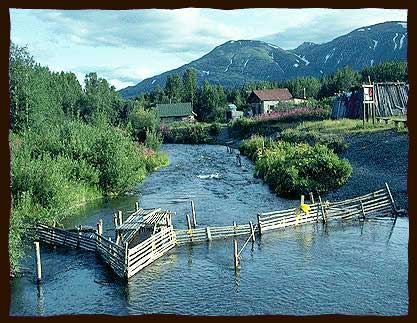 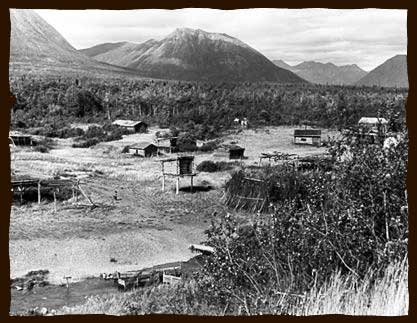 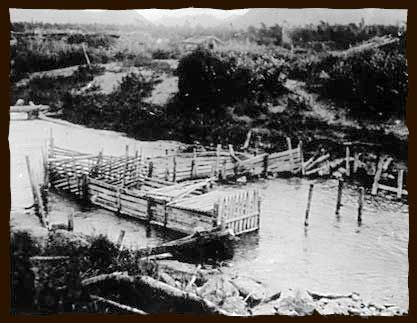 There used to be many houses at Łu Ghą. It was one of the most important headquarters of the Southern Tutchone. There are old and new buildings along the shallow Łu Ghą Chù (Klukshu River) and there are fish traps which are still in use.

The village was founded by the hero Akhjiyis (a Tlingit name). He was hunting in the mountains and came down to find the narrow shallow stream rich with nììle (coho or silver) salmon. According to some versions of the story, he was shortly afterwards introduced to the box fish trap by Chilkat Tlingit and became the first Southern Tutchone to use it. Before that they were using the cone shaped traps.

Gyü (king), sambay (sockeye), and nììle (coho)salmon run up the Shäwshe Chù (Alsek and Tatshenshini) and Klukshu Rivers to Klukshu Lake and on into Little Klukshu where they spawn. Later, into November, the thì (dog) salmon run here. It was mostly dried for dog food.

There seem to have been two fishing calendars at Klukshu. Before the abandonment of the Shäwshe (Neskatahin–Dalton Post) settlements, people would fish on the lower Shäwshe Chù (Tatshenshini) from May to July, not moving onto Łu Ghą (Klukshu) until around August first, and then staying until September. After the move to Shadhäla (Champagne), perhaps because of the school year, people began coming around the 20th of June and leaving a little after August first as they had to get moose and prepare dry meat.

The salmon were caught in traps, dried and then stored in caches. Out of respect for the fish, they were killed quickly with a special club. The first salmon caught each fall would be cooked and served to everyone in celebration. Some families carried their fish with them when they returned north. Sometimes caches were left behind and brought in winter by sled back to Shadhäla (Champagne). And in the old days some people would stay in the area and trap through the winter, living off the fish cache.

Many people are buried in the Klukshu gravesite. There was an Anglican church in a quonset hut. In the 1930’s, children went to school here in the summer while the families dried fish. After the highway was built, the children were taken by truck to boarding school in Whitehorse.

Today Łu Ghą is reached by a short side road from the Haines highway. The Champagne and Aishihik First Nation has built a new footbridge here, replacing the log bridge seen in old photographs.

The map name Klukshu derives from Tlingit Ł’ukshù ‘end of the coho-salmon [run]’. It was recorded by Glave, the English reporter-adventurer in 1890. The Lake drains south via the Klukshu River which joins the Tatshenshini near Dalton Post. On older maps the Klukshu River is called the Unahini which is its Tlingit name Ghunà-hîni ‘Athapaskan River’.

The kind of fishtrap used at Łu Ghą is highly sophisticated. A V-shaped fence is placed in the creek, pointing upstream. Inside the V is a long box. The fish are funneled into the point of the V where they turn back, and jump into the box over a row of pointed sticks which angle into the box. The water in the box is too shallow for the fish to jump out of. The fish are taken from the trap with a gaff, clubbed, then cleaned and cut for drying.