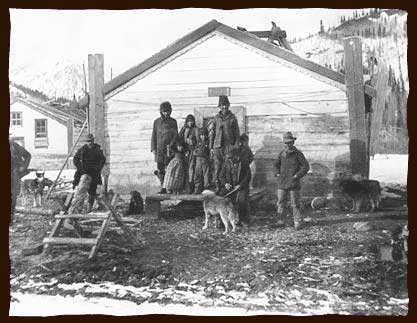 The Southern Tutchone of the Shäwshe (Neskatahin–Dalton Post) area had a traditional headquarters on The T’àt Chùa (Village Creek) near its juncture with Shäwshe Chù (Tatshenshini River). This may have been the southern Yukon’s oldest and most permanent village. The Southern Tutchone usually refer to it by its Tlingit name Nèsghadi Hîn ‘water (goes) under rocks’ which may mean the same thing as the Southern Tutchone name. The creek was bigger then and teeming with sockeye salmon. The small lake at the end of the creek where the fish spawn is called K’ā Mǟn ‘Old Male Sockeye Lake’ (Neskatahin Lake) after the k’ā or old male sockeye which have humps on their backs when they spawn. Southern Tutchone also came here from Hutshi and Aishihik to fish salmon.

The Shäwshe people moved to lower Shäwshe Chù (Tatshenshini) fishcamps in April to harvest salmon from May to the end of July when they returned to The T’àt Chùa to dry and cache fish and berries for the winter. Then they moved to Łu Ghą (Klukshu) to fish until freeze-up when some went back to The T’àt Chùa, others to Titl’àt Mǟn (Dezadeash), Aishihik and Hutshi. In the winter the Southern Tutchone would disperse in small groups to hunt and trap on the land but return with their fur harvest to trade with the Chilkats for blankets, guns, powder, and tobacco.

The Shäwshe people traded with the Chilkat Tlingit from the coast who came up the Klehini river. Large parties of Tlingit would come in February and in early summer to trade for a few days before going further inland, sometimes as far as Selkirk on the Yukon River. The trade visits involved much feasting, celebration and story-telling. Each Southern Tutchone would have one Tlingit trading partner. Both traders were from the same clan and the partnership was often reinforced by marriage. In this way, the clan system spread from the Tlingit to the Southern Tutchone.

The Southern Tutchone of Shäwshe themselves served as middlemen with the interior. Before the war with the Upper Tanana people in the mid 1800’s, the Southern Tutchone snowshoed to the Donjek River to get furs and copper from the Upper Tanana to trade with the Tlingit. By the 1890’s some Shäwshe people were going north on the well used trails to the Yukon River to trade with the non-natives there, rather than trading with the Tlingit.

The first white men to come here in the 1890’s found Southern Tutchone living in houses made from planks with shingle roofs and wearing European clothing. Originally people lived in brush camp houses but began using imported axes and saws to build coastal style houses after the mid 1800’s. By the 1890’s there were about a dozen multi-family dwellings. Most Shäwshe people moved to Champagne in 1902.

In the 1910’s, new clan houses with formal names were built here. Big potlatches were held to help with the construction and people came from as far away as Selkirk and Little Salmon. The Wolf K’etlimbet clan built the Butterfly House (Paddy Duncan House) and the Crow Ghànaxhtèdí built the Drum Sound House (Big Jim Fred House). A few years later, the Duncan and Fred families moved to Łu Ghą (Klukshu). The Butterfly house is the only old structure still standing in The T’àt Chùa today.

About half the village has been bull-dozed by mining activity. Around 15 structures remain as does the graveyard on the west side of the creek with about 30 graves.