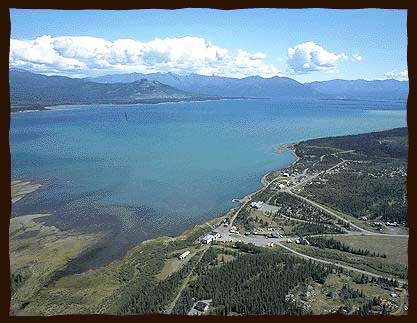 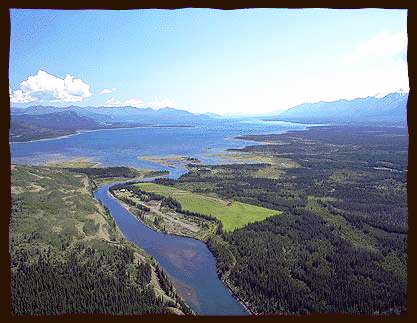 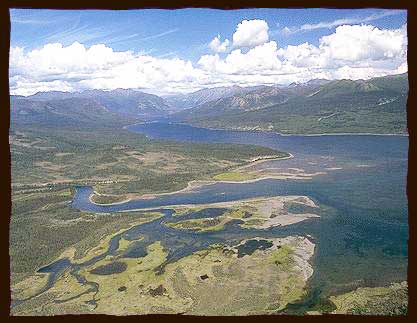 The Southern Tutchone name means ‘big whitefish lake’. The Tlingit name Łùxh-àní ‘whitefish country’ is the source of the English name Kluane, and the Southern Tutchone Łù’àn is probably adapted from it as well. This is a good fishing lake for whitefish, trout and thì or dog salmon. The lake is the largest in the Yukon. It is deep and has dangerous boating conditions at certain times of the year. The first non-natives to try boating on Kluane, E.J. Glave and Jack Dalton, almost died in the attempt. The Alaska Highway goes along the south side of the lake and carries many travelers year-round.

The 1903-1904 Kluane gold rush probably brought the first non-native settlers to the area. Louis and Gene Jacquot from the Alsace region of France established the trading post at Burwash Landing about 1904. Shortly after they began building cabins for the families from the upper White and Donjek River area who would stop to trade during their seasonal rounds. Eventually these families settled here. Jimmy Joe’s father, Copper Joe, who died in 1943, was the one person most responsible for the move to Burwash Landing. The Aishihik people also traded at Burwash Landing. They came through Isaac and Gladstone Creeks and built huge signal fires on the shore of Kluane Lake. The traders would send a boat over to pick up the people who wished to trade. The Jacquots had forty or fifty horses which packed supplies from Whitehorse to Christmas Creek and later to Kluane from where the supplies were boated to Burwash Landing. The wagon trail, the road and finally the Alaska highway followed much of this route. The brothers also ran a sport hunting business.