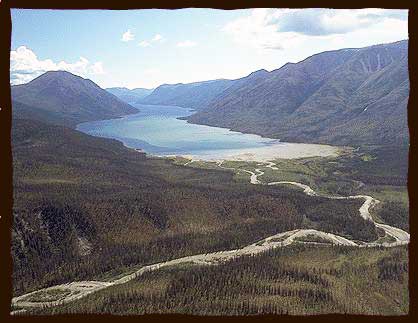 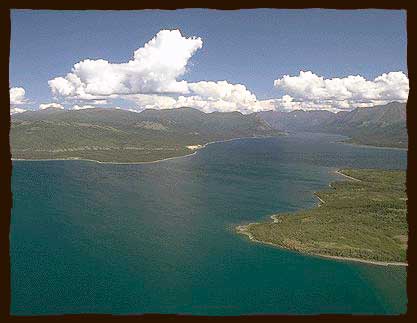 Ǜa K’enji ‘Fishtrap Place’ refers to the area along Talbot Creek where it runs into Talbot Arm or the ‘big arm’ of Kluane Lake. The Kluane Lake people used to set fishtraps in the creek for whitefish. In the mountains around the creek and the arm, the Kluane Lake people hunted for sheep, moose, caribou and other animals. Moose Johnson had a cabin at the head of the arm. The ruins of hundreds of brush camps can be seen in the area. Along the banks of the creek there are the remains of three houses whose roughly pyramid-shaped frames would have been covered with moose hides. These structures are over a century in age.

In late August of 1948 McClellan met several Aishihik families in a meat camp on the Big Arm of Kluane Lake where they were drying good numbers of sheep. The people had come via Tthe Yì Chù (Gladstone and Isaac Creeks) with horses about a month earlier. They reported that Aishihik men formerly hunted as far west as Duke river meadows and north around Tincup Lake.

In the fall, before freeze-up, people would build large brush fires on the shores of the big arm to attract and then spear whitefish.