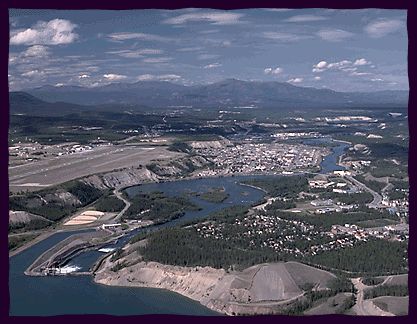 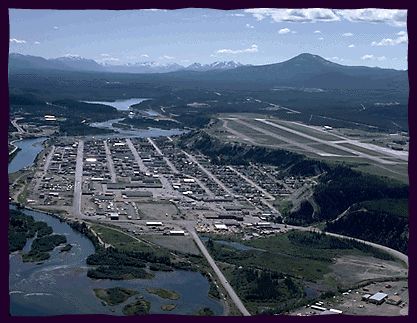 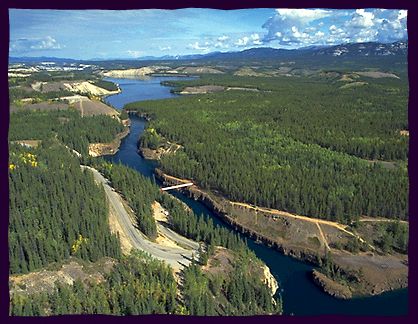 The Southern Tutchone name Kwänlin originally referred to the place upstream from the modern town where the river flows through a narrow canyon with steep rock walls. This narrowing is now called Miles Canyon in English. Kwänlin was important for two reasons. It was a natural stopping place for travellers. The rapids below were extremely dangerous, the most dangerous obstacle on the whole Yukon River, so there was a portage around them. Also, fishing was especially good around Kwänlin. People caught king salmon and other fish.

The fishcamp Kwänlin moved downriver several times under pressure from non-natives. At the original site, Canyon City was built during the Gold Rush. Kwänlin people moved downriver to the area near present-day Riverdale, then across to where the Rotary Peace Park is now located, and finally down to the flats below the shipyards in what is now the industrial area. In the 1980’s most residents of this now permanent settlement moved to the Mount McIntyre subdivision which is locally called the Kwanlin Dun village.

The name Whitehorse seems to come from early miners who thought the rapids below Miles Canyon, Kwänlin, resembled the manes of horses. It was in common use by 1871. The White Horse rapids can no longer be seen. In 1957 construction began on a hydroelectric dam which flooded the rapids with Schwatka Lake. The movie at right, submitted for copyright by Thomas A. Edison in 1900, shows a scow descending the rapids in 1899.

During the Gold Rush, there was a short lived settlement at Canyon City above Miles Canyon, as tramlines were constructed around the rapids. With the completion of the White Pass and Yukon Railway in 1900, the main settlement moved to the trans-shipment point between steamboats and railway on the west side of the Yukon River, where downtown Whitehorse is today.