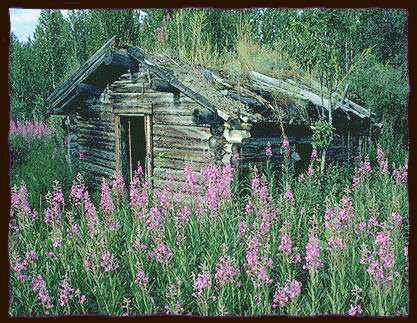 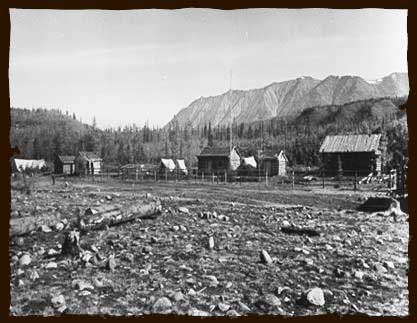 The name Shäwshe originally referred to the region on the Shäwshe Chù (Tatshenshini) around the mouths of Łu Ghą Chù and The T’àt Chùa (Klukshu and Village Creeks). Both creeks were important for salmon. 300-400 people would gather in spring and summer from as far away as Hutshi and Aishihik to gaff and trap sockeye. The wolf owned the fish traps at The T’àt Chùa (Village Creek) while the crow owned those at Łu Ghą (Klukshu). The original village in the area was on The T’àt Chùa. Around the turn of the century a non-native trading post, Dalton Post, was built on Shäwshe Chù at Łu Ghą Chù (Klukshu River) and many Southern Tutchone built homes nearby. Now Shäwshe usually refers to Dalton Post.

The families of Jimmy Kane, John Kha-Sha, Parton Kane, David Hume and Jack Pringle were based here until the 1950’s when they moved to Łu Ghą (Klukshu) or Dakwäkằda (Haines Junction). Some Dalton Post cabins are still standing and those built by Chuck Hume and old Jack Pringle are used as fishing cabins by Champagne families.

Jack Dalton built the trading post in 1894. He took advantage of the network of Indian trails used in the fur trade. But the post soon became far more important as Dalton was able to use the trails to profit from gold rush transportation. By 1898 he was charging a toll to travelers using his route to the interior. He drove herds of livestock north to provide fresh meat to Dawson residents. In 1897 Dawson had 30,000 people and was the largest city in Canada west of Winnipeg. Around this time the US government hired Laplanders to drive a herd of reindeer along this trail because they thought US prospectors were starving. Dalton also profited from the Dalton Pony Express Company which ran between the coast and the Five Finger Rapids, on the Yukon.

But the boom declined, steamboats began plying the Yukon from Whitehorse to Dawson in 1898, and in 1900 the White Pass railroad reached Whitehorse. In 1902 Dalton sold the business and left the Yukon.

There was a Northwest Mounted Police post here from 1898 to 1905 when the settlement and the Dalton Trail were abandoned. The only standing structures from Dalton Post are the remains of mining operations from later years.