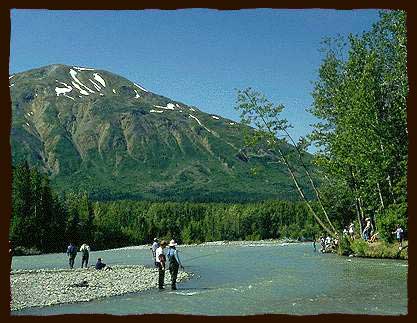 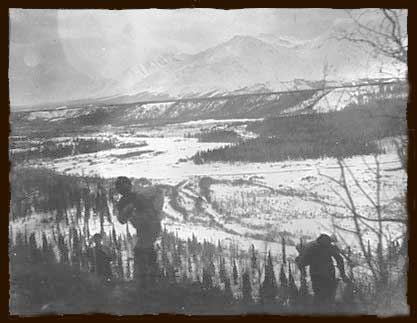 Prospectors on a hill above Dalton Post overlooking the Tatshenshini valley in 1898. (Yukon Archives: 3678) 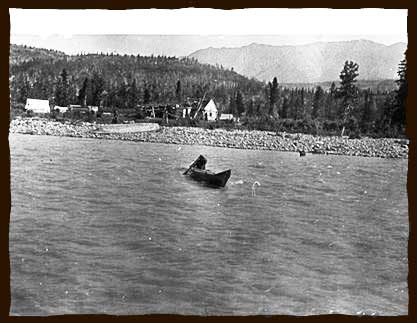 The large river that flows by Shäwshe (Dalton Post/Neskatahin) is called Shäwshe Chù in Southern Tutchone. On maps this is labelled the Tatshenshini. The Tlingit name Tàcha.àn-shahîni originally referred to the Blanchard River, a few kilometers upstream from Shäwshe. The original Tlingit name for the Shäwshe Chù was Àłsêxh and this is the source of the name ‘Alsek’ found on modern maps.

Shäwshe Chù was a traditional hunting and fishing area of the Southern Tutchone Shäwshe people. In spring time the people would gather at Shäwshe from their winter hunting and trapping areas, from as far away as Hutshi and Aishihik and then go down the Shäwshe Chù to meet the salmon. There were several salmon camps along the river going as far down as its confluence with the Titl’àt Tágà/Shadhäla Chù (Alsek River). Chilkat traders would sometimes meet the Southern Tutchone on the river on their way inland. Both Southern Tutchone and Chilkat Tlingit would go downriver to the coast to trade with the Tlingit at Dry Bay. The trip from Shäwshe was difficult and took at least two months. The travelers returned not only with trade goods, but also with new dances, songs and stories to share with their people.

Over a century ago there seems to have been permanent settlements on the lower Shäwshe Chù with mixed Southern Tutchone-Tlingit populations. The coast people came looking for flint, met the Southern Tutchone, and began trading seal oil for furs and hides. These settlements were abandoned in the mid to late 1800’s, perhaps as a result of disease epidemics. Some survivors moved upriver to join the Southern Tutchone of Shäwshe, others joined the Tlingit in Chilkat or downriver in Dry Bay.

For a while after the British Columbia border was established the Southern Tutchone lost hunting rights along most of Shäwshe Chù. This loss, the loss of the southern villages, and the move of most people to Shadhäla after Dalton’s trading post closed, all contributed to a decline in activity in the area. Today only a few elders know much about the traditional use of the region.

Most people who now travel the river are the tourists who make the white-water raft trips in summer from Shäwshe to Dry Bay.