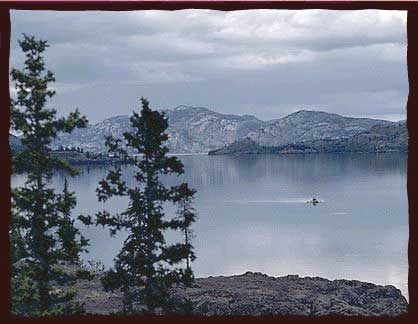 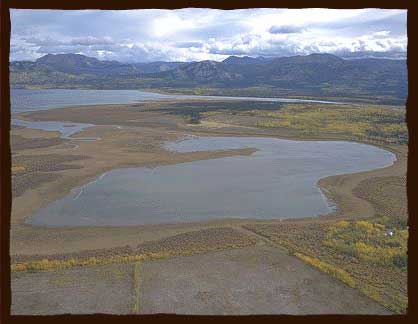 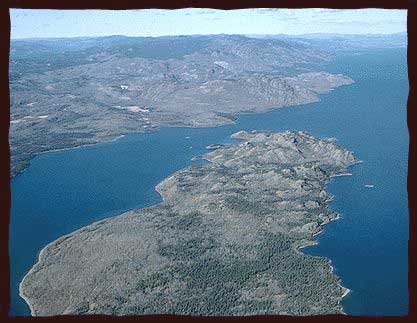 This lake has long been an important gathering place for Southern Tutchone people. The name itself, Tàa’an Mǟn, has been given various interpretations by local Elders, a situation which often arises with place-names which are very old. One suggestion is that Tàa’an Mǟn means “Head of the Lake”.

According to Mrs. Irene Adamson, Tàa’an Mǟn, has for centuries been a “food bank” for people from the surrounding areas. They knew that the fish resources could always be depended upon in times of scarcity, especially in the early spring (called dậ in Southern Tutchone) when very little fat was available to the people. She notes that Män Tl’at“Shallow Bay” on the southwest end of the lake was a favoured fishing spot where willow bales were used in early days to block off the stream channel so that people could take large quantities of whitefish, pike, grayling and sakaya “round whitefish”.

There was much contact between Tàa’an people and the neighbouring Tlingit to the south. Intermarriage took place, and many of the contemporary Tàa’an families have both Southern Tutchone and Tlingit roots.

Chief Jim Boss was a well-known leader of the Tàa’an people. He petitioned the Crown for a land claim settlement in the period immediately following the Gold Rush, when thousands of non-native people passed through his traditional territory. One result of this effort was the eventual establishment of a reserve at Tàa’an Mǟn, which still exists.

There have been native houses and settlements at several locations around the lake, and many native people continue to live on or near the lake.

The English name, Lake Laberge, was apparently given by W.H. Dall to commemorate a French Canadian, Michael Laberge, from Chateauguay, Quebec. Laberge traveled from Fort Yukon to Fort Selkirk in 1867 as part of the Western Union Telegraph Expedition, but it is not known whether he actually traveled upriver as far as Tàa’an Mǟn. The lake and its location may have been described to him by the local native people.