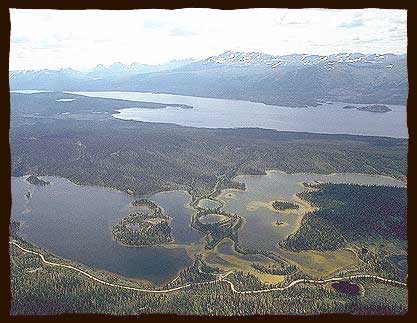 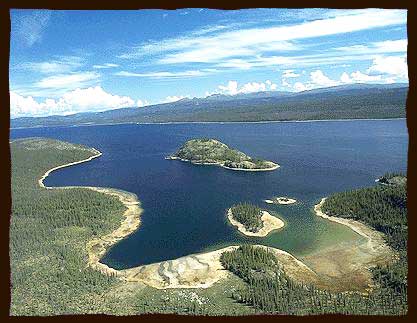 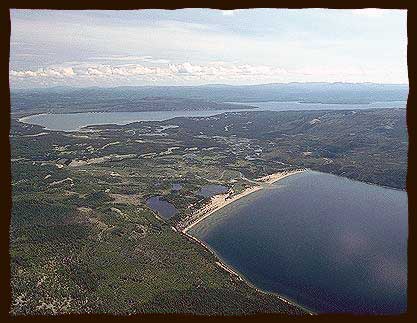 The old and new Aishihik villages are at the north end of the lake on a shallow bay. The location is good because it is out of the wind and fish come to spawn in the shallow water. There is good hunting in the surrounding area. At one time the caribou hunting was especially good. People would travel in all directions hunting and fishing on their seasonal rounds, always returning to the village headquarters. There are two cemeteries overlooking the present village, and two lying to the north and west.

The road to Aishihik village runs north along the east side of Män Shäw, but the main traditional trail from the south ran along the west side of the lake to Äshèyi then north to Fort Selkirk on the Yukon River. There was a trail on the east of the lake but it ran to Long Lake and Hutshi. Besides trails north to the Yukon River, south to Klukwan, and east to Hutshi, there were trails west to Kluane Lake and northwest to the Nisling River. When the Tlingit began coming far inland to trade, local people acted as guides and middle men between the Chilkat from the south and the Northern Tutchone to the north.

A typical situtation was that of Gòłan, a coastal Tlingit who came north trading as a young man. At Selkirk he met Mằdằka and wanted to marry her and take her home. The Selkirk people would not let her go, so he returned to Klukwan. The next year he came to Selkirk with presents for her parents, but they still would not let her move to the coast. Instead, as a compromise, they let her move to Aishihik where she had relatives and would be closer to Gòłan. Then Gòłan also decided to stay at Aishihik. They had one child, Isaac Chief, who survived to adulthood. His son was Chief Isaac of Aishihik. Memories of Gòłan and Mằdằka remain strong in both Äshèyi and Klukwan traditions. As late as the 1940’s and 1950’s, Aishihik and Klukwan families were spending time together.

The US army constructed an airport at Aishihik during the building of the Alaska highway. The Department of Transport maintained the airport until the 1960’s. At that time the Federal Department of Indian Affairs told the Aishihik people that the road would no longer be maintained and they would no longer receive rations or schooling for the children. To encourage them to move, Indian Affairs built housing at Canyon. Most people moved there or to Haines Junction.

The road is still open today. Two families live year-round in the village and about twenty houses are in seasonal or weekend use. Many Äshèyi people who work in Whitehorse or Haines Junction return to the village almost every weekend.