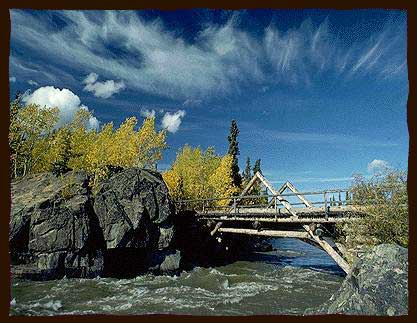 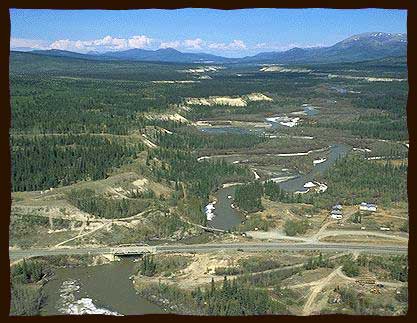 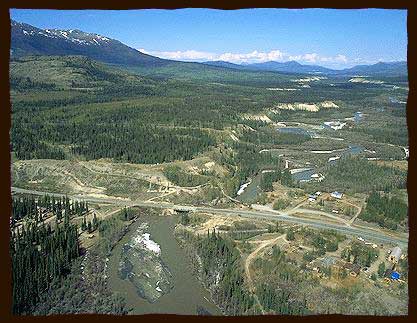 This site was a traditional Southern Tutchone meeting and fishing place above the mouth of the Aishihik River. In 1903 during the Kluane goldrush a wagon road was built from Champagne to Burwash. In 1904 a roadhouse was built at Tthe Yänlin (Canyon), where the road crosses the river, and Annie Chambers established a trading post here. Ädäts’ür Mǟn (Canyon Lake) people moved to Tthe Yänlin to be near the road and the trading post. The settlement must have been large because there are many people buried in the graveyard which is on a hill overlooking the village. Many graves are likely of people who died in the 1919 influenza epidemic. Several gravehouses from the early 1900’s are still visible. The Jacquot brothers built a log bridge for the wagon road around 1920. It was rebuilt during the 40’s by the US army and is still standing.

When Haines Junction was established in the 1940’s there was work on the pipeline and the experimental farm. Part of the old Tthe Yänlin site was leveled by the US army to make way for the new highway, but some cabin remains can still be seen. The Canyon people moved to Haines Junction and worked for wages. Having entered the cash economy they no longer hunted and trapped full-time for subsistence.

In the late 1960’s when the Aishihik airport closed, Indian Affairs convinced the Aishihik people to move to Tthe Yänlin (Canyon). Indian Affairs said the road to Aishihik would no longer be maintained and there would be no rations or child support for people who stayed in Aishihik. Indian Affairs also built housing at Canyon to encourage the move. Today about 20 families live here.

Archaeologists have found the remains of stone spearheads, some small fine tools, and a few large bison bones. The artifacts belong to the Little Arm culture (8000-2500 BC) which used very precise and finely chipped tools, or microblades.