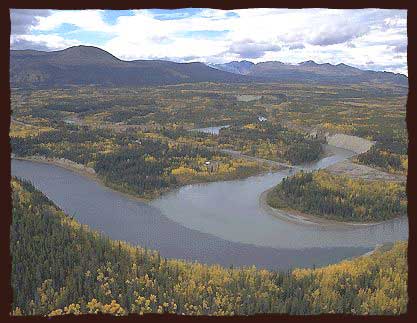 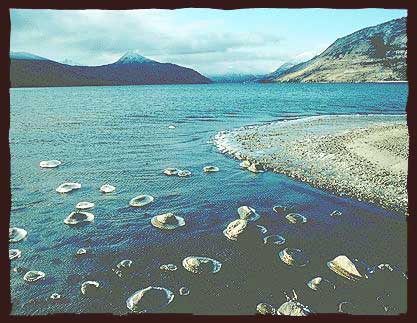 There is a narrows in the lower (northern) section of the lake where people used to cross by raft, hence the name Nakhų̄ Mǟn.

There was a fish camp at the northern end of the lake. It is reported that remnants of caribou fences can still be found along the lake’s rugged shoreline. Mrs. Annie Ned recounted that:

Before Coast Indians, before guns, they had ranch for moose at Lake Arkell (Kusawa). They got corral there, set snares. Tehn everybody came there- lots of meat. lots of fish. They helped together.

Southern Tutchone tradition says that there was a great flood sometime after the creation of the world. The people tried to escape on rafts. Southern Tutchone Elders say that the remains of one of these rafts can be found on top of Dhäl Shäw, a mountain near the head of this lake.

Kusawa Lake had provided a natural pathway for the Tlingit in their trade with the interior people for centuries. The first published record of it seems to be from the early 1880’s in a report on the travels of Arthur Krause of the Bremen Geographical Society who visited the lake in June, 1882. Earlier, in 1869, the Tlingit Chief Kohklux drew a ‘long skinny lake’ he called Koo=see=wagh that emptied into the Tahk-heena River on a map he and his wives sketched for George Davidson from California.

In the 1890’s, Jack Dalton used the existing trails to establish his pack trail from Dezadeash Lake, up Kusawa Lake to the Takhini river.

Kusawa Lake is now one of the most favoured recreational spots in the Southwest Yukon.