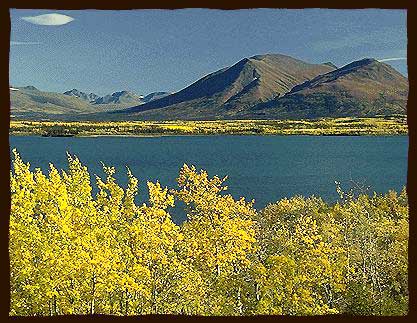 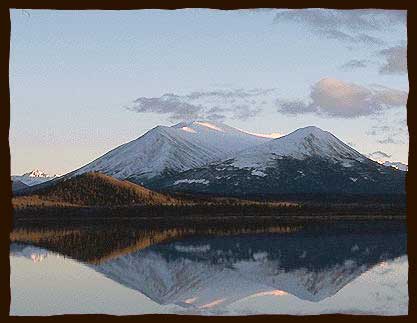 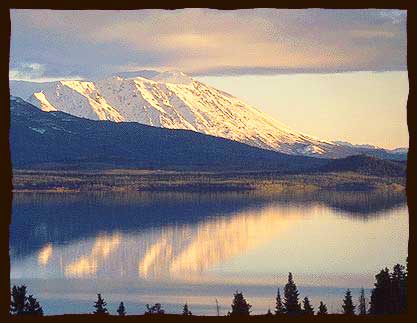 People often call this lake ‘Head o’Lake Lake’ which is a literal translation of the Southern Tutchone name. The Titl’àt Mǟn people had a number of fishing camps along this lake before the turn of the century. Lake trout, round whitefish, northern pike, Arctic grayling, and burbot (freshwater cod) are plentiful:

In early spring men would work in pairs to spear the fish through holes cut in the ice. The pair covered themselves with a blanket in order to see better into the water. While one dangled bait in the water, the other speared the fish. Later people would learn to set nets under the ice from non-natives. Fishtraps were set for whitefish in the outlet stream between Titl’àt Mǟn and Six Mile Lakes. The traps were different from the ones seen today at Łu Ghą (Klukshu). They were probably cone-shaped baskets, about 1.2 meter long, with a funnel in the mouth.

Today some families have cabins on the east shore of the lake, just south of the outlet and along the summer trail to Shadhäla (Champagne). There is also a large gravesite. From here they trap along the Titl’àt Tágà’ (Dezadeash River) and in the area of Frederick Lake, to the east. On a hill overlooking Frederick Lake there is also a small gravesite.

At the southern end of the lake, at the start of the trail to Klukshu, there is an old camp called Tằkwằzhän. In June and July the Southern Tutchone would dry and cut fish at Łu Ghą (Klukshu), then pack them in several trips to caches at Tằkwằzhän. From there, around August 1, the cached fish would be taken north by boat.